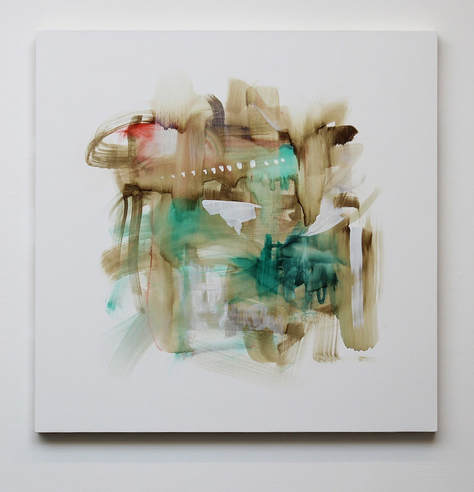 Joshua Backus, Untitled, Oil on MDF, 2016
,I view philosophy not simply as a discipline, but as a way of life.  As such, my orientation to diversity is necessarily informed by my philosophical commitments.  This is most manifest in my commitment to being-in-the-world, a watershed concept in the phenomenological tradition.  To be in a world is to be situated in a historically inherited context of meaning not within one’s control.  Thus, my efforts to phenomenologically articulate meaning-matrices of human experience call for awareness of situation with respect to a whole range of determining factors, from geography to non-positional landscapes such as those of language and imagination.

Moreover, I identify with phenomenological methodologies on account of the triple redemption at play in them: of the otherwise consistently devalued body, of lived experience founded on the body, and of intersubjectivity.   Speaking to silences in the history of philosophy in the West, the body is, for phenomenology, situated in a world always already shared with others.  As I understand it, however, “the body” does not signify “the Body,” the empty universal, lacking in particular content so as to be applicable to all.  It signals the lived body, emphasizing the singularity of personal experience in this body – distinguished as such by color, ability, ethnicity, sexual orientation, identification, and more – even as we lay ethical claim to the human integrity that we each and all of us deserve.  Finally, I appreciate that what counts as true depends on intersubjective corroboration, which is made all the more powerful by the testimonials of a diverse community.  In phenomenological terms: the world speaks, the others with whom we share the world speak.  The attentive phenomenologist cultivates the art of listening.

In the context of the classroom, this means recognizing the singularity of my students’ lived experience, the myriad ways in which they live their embodiment from out of situational contexts that make it more or less a matter of ease for them. This means accommodating accordingly, maintaining firm boundaries for learning objectives within differing calls for flexibility.  This means executing lectures that rely on concrete examples to wed theory to experience, but also designing activities that draw from experience so as to open a space in which testimonials emerge as contributing to the advance of our collective understanding.  This is not to instrumentalize the voices of the marginalized, but to combat this tendency in so-called “multicultural” milieu by curating course texts that speak non-instrumentally to difference.  Teaching these texts means carefully negotiating when to listen and when to speak up, whether in response to students’ provocations or by heuristically drawing attention to my own contradictory positionality as a marginalized Sephardic Jew sometimes read as brown, whose ethnicity is modulated by light skin privilege.  Above all, however, this means calling out the notable absence in my traditional predecessors of a call to justice rather than simply to truth.

Taking up this mantle, I keep myself open to learning in the moment from conflictual experiences in the classroom including my own, for the purpose of better pedagogy, but, above all, to forge community.
Proudly powered by Weebly